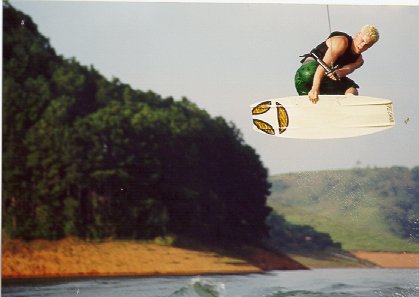 This section is arguably one of the best wakeboarding video parts of all time! A few things to watch for here:

1: Notice the back of the boat towing Randall into his opening tantrum to blind…it’s an OUTBOARD! So if any of you think you can’t go big unless you have one of these new plugged and played boats, take a quick lesson from 2001.

2: At 0:36 the Vandall stomped the biggest method ever known to man on a wakeboard. Sure Rusty and Steel can battle it out to see who had the bigger, um…double up but we all know who the true king is!

3: Look at Randy’s boot setup in his closing trick! Massive front 3 off the double up with only ONE FOOT STRAPPED IN! There’s only a couple of guys that would be willing to try this today.

Randall Harris was a true pioneer in the wakeboarding industry. And it’s cool that almost 20 years later the tricks he was putting down are still bad ass to today’s standards.

Welcome back for the third episode of Summer Lunch Break! This week we’re sitting down with the man, the myth, the legend, Shaun Murray! Shaun…

Let’s grub out, hang out, and talk wakeboarding! Welcome back to Summer Lunch Break for episode 2! This week we’re sitting down with “The Most…

This website uses cookies to improve your experience. We'll assume you're ok with this, but you can opt-out if you wish.