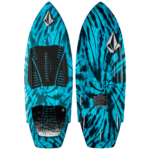 The Sea Captain is an on the rail drive surfer with a legendary name endorsing it. A thruster inspired shape for surfers looking for on-the-gas edge hold. This board has a narrower outline allowing it to sit deeper in the water. The result is a strong edge that will lock into a turn. For the rider that wants a strong, powerful cutback, but also wants to feel more connected. This is a quicker reacting version of our other proven traditional surfer, the Conductor. Did we mention that this collaboration comes complete with artwork created by the bees’ knees of surfing?

+ Hybrid Style
Toss some buckets with some smooth, linked turns inspired by your favorite saltwater surfer. Traditional surf shapes have a thicker profile and a mellower rail/bevel allowing a rider to pivot a turn more from their back foot and are best ridden with either a deeper fin or multiple fins. Riders usually apply more pressure on the back half of the board and generate more force through a turn. Still very capable of doing tricks on and off the water just with a fluid like feel.

+ Stoney Baloney Technology
Another archaeological gem of a surf movie created by the fine folks of Volcom. Relevance to the construction of this surfer?

+ Standard Thickness
This thickness is for a rider that just wants the classic feel of a traditional wakesurf cross section – not too thick, not too thin. Offering greater feel for the water than its thicker counterparts, but also has more top water speed than a skimmer.

+ Hard Rail
High speed carves for riders that like to jump on the gas pedal.

+ Machined EVA Front Pad w/ Concave & Machined EVA Rear Pad w/ Extra Tall Tail Kick
High performance EVA built to withstand years of swells with as much traction as you can get out of foam. Most of these boards come with an arch support for your back foot, concave on your front foot for greater response, and an extra tall kicktail for added leverage.

+ 3 Symmetric 3 Fins
A similar rake and outline as the floating version. These standard fins are made out of a traditional fiberglass. They don’t have the response of Ronix’s other Fin-S Fins, but they are used on the same tool-less mounting system.

+ Core – Handmade by Robots
Every surfer Ronix makes removes human error. All of their cores are machined to the exact tolerance they spec’d out.

There are no reviews yet.