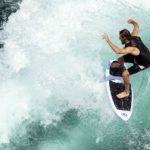 AN OCEAN INSPIRED TRADITIONAL SURFER WITH A REACTIVE TIP AND LOCKED IN TURN.

The best slashing board we have ever made. The Atlantik is designed for powerful bottom turns, off-the-lip airs and walls of spray. A performance driven surfer that features instant feeling power and response. New for 2023 we added a sharper, skim-style rail in the tail of the Atlantik increasing speed. We also made the construction lighter, allowing the board to feel more reactive. Additional performance is achieved using the following board components.

Thru-Tail Bottom Concave: Creates lift and speed through the tail of the board making it easier to re-balance from spins and maintain pocket speed.

Rail Wings: Create break in rail-line allowing for pivoting of the tail.

Fang Tail: Originally cut on the shores of Lake Ronix. Increases straight line speed and makes maneuvering the board on rail instant.

Rapid Taper: The taper from the board’s wide point to the nose is aggressive. This decreases the engaged rail creating instant turns and pivoting in the nose.

Dome Top: Allows the board to roll from edge to edge faster.

Transitional Rails: Gradually sharper edges in the tail. Better water-flow off the tail increasing speed and makes for a quicker release on the lip of the wave for tricks and spins.

Quad Fin: Power at the bottom turn and quick release at the top of the wake. Propel the board into the turn with no performance hang ups when you are ready to release into a trick

+ Surf Style
For riders that like a little bit of everything. They want to generate power through their bottom turn, but still be able to quickly and easily leave the waterline. A growing style of wakesurfing designed for bigger airs leaving the wake, but can still easily lock in for a proper cutback.

+ Flyweight Technology
Less is more. These cores are designed with a minimalist approach, keeping the purest form of surf in mind. For many riders – lighter is better.

There are no reviews yet.